Welcome all. It’s such a pleasure and privilege to see all of you here this morning on such an important day. A week ago, I stood over in the pavilion across the field and watched our Pre-K students transition into kindergarten. And here we are exactly one week later celebrating this beautiful group of people who are embarking on their own rite of passage. It was moving to think of all the years that pass between these two milestones. As they say, the days are long and the years are short – and here we are. And seeing you all assembled here today, with many of our traditional commencement rituals lovingly restored, and some new student-driven enhancements added, brings me great joy.

Before we begin, I ask that we silence our phones and our thoughts and be present here for our graduates during this important moment. I also want to share some appreciation.

Thank you first to the team of people who have worked hard to make today possible, including Matthew Boyd, Kelly Clifton, Keith Estey, Dana Watkins, and Annie Funnell. Thank you to the faculty and staff who have advised, counseled and taught these incredible students before you today, whether this year or in the past years that they have been with us. The past few years have been anything but easy, and the creativity and resilience of our professional community in the face of it all have been nothing short of extraordinary. Thank you to our trustees, whose support helped us to make hard decisions over these years on behalf of our students. Thank you to the Narragansett and Wampanaog Tribes on whose land we gather today. Thank you to Mary Colman Wheeler for the vision to bring the Wheeler Farm and the Wheeler School into existence. Thank you to our parents and guardians who have been with us all along the journey of the class of 2022. And on that note, soon-to-be graduates, make sure you spend a lot of time heaping loads of thanks on them today even as they celebrate you. They made this possible.

And last, to the class of 2022, since I won’t have a chance to say this to you again today, YOU INSPIRE US. Over these years, you have demonstrated for the adults around you and for the younger children alike what resilience, fortitude, flexibility, and positivity could look like. You took what the world gave you and spun gold from straw. On behalf of all of us at Wheeler, thank you.

As we begin today, I want to talk to you a bit about those school-given powers that we sing about in our school song, Arise All Joyously, in particular imagination and will. Think about your earliest memory of your imagination. A time that you sat and imagined something yet unknown – a conversation about to happen, a project you wanted to undertake, an adventure with a friend, a story you had in mind, an invention or puzzle or life moment. My earliest memory of imagination was playing school with my stuffed animals – a bit on the nose, I know. I also played the floor is lava in the apartment upstairs from mine where my best friend lived. (Yes, that was a thing before the show!) There were more serious imaginings too, like when I spent time in graduate school writing down some ideas I had about what I thought an ideal school could be, and when six years later, I was granted the opportunity able to start a school in New York City that aspired to live out those ambitions. My imagination has had a big role in my life, in making things seem possible and in creating the path forward.

Our ability to imagine – to conjure and manifest that which is yet unreal – may be one of our most distinguishing characteristics as a species. And it is this imagination, plus a serious application of will that I hope you take with you.

To illustrate this point, I learned about story that bookends the story I told you in September at Convocation about the building of the Brooklyn Bridge. In the same era, another feat of engineering was about to take place, the building of the New York City subway. While it may seem obvious now, it was not always so that people could envision going underground to travel – at the time you went underground for mostly bad reasons. But the city was extremely congested, and was attracting more and more people each day. Crowded with as many as 150,000 horses and buggies each day in only a fraction of the landscape that we know to be New York City, it was becoming difficult for the city to thrive.

One man, Alfred Beach, an entrepreneur, technology evangelist, and publisher of Scientific American magazine, had an idea for moving transport underground with trains inside pneumatic tubes, sucking the trains between stations. While he knew that convincing the renown, corrupt and powerful William Boss Tweed would be neigh impossible due to Tweed’s financial interests in elevated trains, he did manage to convince him to allow him to build a demonstration as a mechanism to carry – of all things – the mail. Once permission was granted, it is said that in the cover of night, in 58 days, he built a train tunnel, at 100 ft long. The full experience underground included couches, chandeliers, a fish pond, and a piano. 400,000 New Yorkers came to ride it in one year, expanding New Yorkers’ imagination to include the possibility of traveling underground.

That was an important step, but it wasn’t until almost two decades later a natural disaster – the blizzard of 1888 – that a convergence of political will began to take hold. That day, over 400 people died – many on the way to work – from the cold and blowing ice. Men were literally seen holding one another and dragging each other across the street against the wind. And here – after a natural disaster highlighting the need for resilience and adaptability – the seeds of possibility were planted for a weather-resilient New York City where travel could take place easily and fluidly, opening the pathways to interconnectedness, expansion, and a safer city for all. Suffice it to say that by 1904 the first subway was ready, and the first Sunday that it opened, 1,000,000 people rode the train, all 9 miles of tracks.

Today, we take for granted that New York City is, in large part due to its subway, one of the world’s global centers – united in its interconnectedness, its cultural diversity, and its massive number of inhabitants. But consider what it must have taken to complete this seemingly impossible task – no less than an act of collective imagination, not only fueled by people with determination but also by the impact of a natural event that could have felt like despair and instead inspired possibility. Consider that if it weren’t for that blizzard, this convergence may not have been realized.

During these years at Wheeler, you have had time to imagine, to learn of feats of daring do as well as the imperfections and failures of our collective story. You have created narratives and possibilities for yourselves, you have pursued your ideas and interests. You have manifested your imaginigs and probably left some lingering.

My wish for you is that you will use these “school given powers” as you graduate today, and imagine what is not yet real and then will what you imagine into being. Remember that setbacks like a blizzard, or a big fat NO!, or a pandemic – may be just the catalyst you need. The very possibility of that which we cannot yet see keeps us striving. So go forth, imagine and do.

And now, let us begin our commencement for the class of 2022. 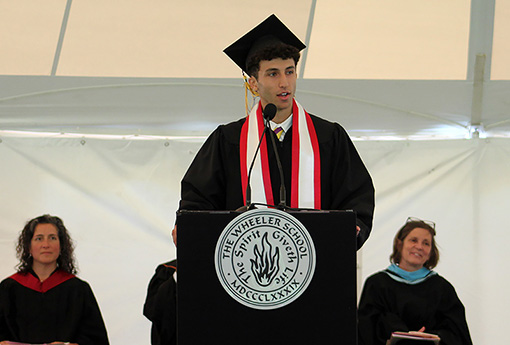