It’s a privilege to get to talk to you today. High school graduation… Exciting, right? It’s kind of a big deal. A memorable milestone, up there with getting your driver’s license, buying a house, or getting married for the second time.

I remember my high school graduation. It was in 1984, which felt like a very significant year. After all, George Orwell wrote a book with that year as the title. His book was about how awful it would be if democracy collapsed into totalitarianism. He wrote it after the end of World War 2, when 1984 was about 38 years in the future. It’s now 38 years after 1984. We’re further from 1984 than Orwell was when he published the book. So that’s weird.

But 1984 is a lot closer than you might think. It is. The original manuscript of 1984 lives just a few blocks from Wheeler. I visited it in the John Hay Library last week.

Anyway, after high school graduation, I took the life path that goes through college. I liked it so much, I never left. I’m still in college. I studied computer science and cognitive science because I found the idea of thinking about thinking to be very compelling. To me, computer programs are like crystallized thoughts.

A lot of my research work is about studying artificial agents. Basically, they are programs that run around in their own little universes and try to figure out what they need to do to succeed. I find that very relatable.

The more I study these programs, the more I think of them as micro versions of animals or even people. Of course, there’s really no comparison between the programs I study and real-world intelligence. After all, my programs are sometimes just a handful of lines of code and a brain has tens of billions of neurons. But the struggles these programs face—how to do the best you can in a complicated and sometimes unfair world—do feel a lot like my own.

I often draw on my own life experiences to write these programs. I know that if I set the program’s threshold for success too high, it can end up concluding that the struggle is futile. It stops learning and stops progressing. But, if I set the threshold too low, the program can become complacent, too content with its current level of development, and again stop progressing. I know that life can be a tightrope walk and I use that insight to build better learning programs.

But I don’t just teach these programs what I know. I learn from them as well. In fact, I’ve decided to adopt a life philosophy inspired by what I’ve learned from building artificially intelligent programs. The philosophy is “radical Boxism”. You might not have heard of it, mainly because I completely made it up. But I do think it has some lessons that you might find helpful. First, some background.

Radical Boxism is named for George Box—an influential statistician. I read his autobiography. He was very smart and quite funny in a British sort of way. Like George Orwell, his name was George. Also like George Orwell, his life path and legacy was deeply affected by World War II. But Box was a little younger. He finished up his PhD around the same time Orwell died. Both in London.

I tend to think of statistics as being pretty dry and alienating. But that’s only because it is.

But it’s also a field that is trying to do something quintessentially human. It’s trying to use the information it is given to figure out what might happen in the future. If our minds have one job, it’s that—take in information about the world, and turn it into insights that can help us achieve our goals. One of the earliest applications of statistics was figuring out how to plant barley to most effectively make beer. That’s important to a lot of people. Today, in many universities, the statistics department is housed in the medical school. Why? Because we need statistics to figure out how to stay healthy. Statistics saves lives.

So George Box was a statistician. He’s known for many results in the field. There’s a kind of statistical visualization called a “box plot”. Do you know who invented it? Actually, that was John Tukey, another famous statistician. The statistics work that Box did is a little technical, so you’ve probably not heard of it. But he’s also famous for something else. He said: All models are wrong, but some are useful.

It sounds like an attack on the fashion industry. But it’s not. “Model” is a word statisticians use to refer to an abstraction. A simplification. A story, often told in mathematical notation, that describes something in the world that matters to you. We make models all the time. Maps are models. Stereotypes are models. Descriptions of personalities are models. The concept you have in your mind of a “high school graduate” or a “republican” or a “democrat” or an “american”. They are all models.

The laws of physics are a model. Evolution is a model. Art, history, philosophy, science, literature, they are all concerned with modeling. Love. Hate. Joy. Family. Human nature. Aspirations. The Future. Success. Making models and using them to understand and find our way in the world… that’s just what people do. Statistics studies how to make and use models effectively. So, you might say statistics is concerned with the essence of the human condition and how to be better.

Look, I’m as surprised as you are that statistics is turning out to be the hero of this story. But I guess, even though it may be dry, statistics is dealing with some pretty juicy stuff.

Models are very important. But, Box said all models are wrong. That’s because the model is not the thing itself. It ignores some of the details to try to get at a deeper truth. As soon as you make a model, it’s not reality anymore. It’s wrong, at least in some way.

And that brings us to “Radical Boxism”. Box said: All models are wrong. But some are useful.

A radical Boxist says: ALL models are wrong. But some are useful.

It’s all in the intonation.

So, how does the philosophy of radical Boxism inform my life? Or more importantly, how might you find it helpful in yours?

I think there’s two essential lessons here. One for each sentence.

ALL models are wrong.

To me, that’s a warning to be humble. It means your worldview, your hot take, your interpretation of events, they are wrong. All of them. Physics, philosophy, history, too. Heck, that means even radical Boxism is wrong.

I mean, they’re not entirely wrong. But they are not entirely right, either. So, be humble. Be kind. Hedge your bets. Don’t risk it all on any one idea if you can’t afford to be mistaken.

I shared this view with a senior colleague of mine, a famous artificial intelligence researcher. He reacted quite strongly and quite negatively. He told me that this point of view, my point of view, was the problem with the world today. I think he was worried that “all models are wrong” promotes a kind of nihilistic thinking. Like, since all models are wrong, I can believe whatever I want. Nothing matters. All is hopeless. It’s a post-truth statement.

In fact, I think it’s pretending that your worldview is the “one correct way to see things” that has gotten us into more trouble than anything else.
But, moreover, this criticism misses the second part of Box’s quote: All models are wrong. But some are useful.

Or, as George Orwell might have put it: All models are wrong. But some models are more wrong than others.

Just because all models are wrong, that doesn’t mean E=MC squared is a matter of personal taste. It just means that there are spheres where this model doesn’t give the right answer. If you are in a situation where E=MC squared applies and you refuse to accept it, well, then you are wrong. Truth isn’t just a matter of opinion, but it’s also not an absolute.

All models are wrong. But some are useful.

The first sentence encourages us to be humble. But the second empowers.

Some models are useful. But what does useful even mean? Useful to whom? Useful for what? Radical Boxism is mute on this point. It’s frustratingly vague and vaguely frustrating. And that’s one of my favorite things about the quote. It leaves it up to us to decide what “useful” means. It reminds us that everything we try to do is a choice.

Do you want to graduate from college early with a dual master’s degree? Or are you trying to travel and learn about the world directly? The models that are most useful to you will be different in these two scenarios. Radical Boxism doesn’t tell you which to pursue. You have to decide.

Being human in the age of intelligent machines is about taking responsibility for that choice. Is this company good or bad? Is this algorithm beneficial or harmful? It depends on what you are trying to do. It’s useful if it can help bring about what you want. And neither computers nor statistics nor AI can make that judgment for us. That’s on us. On you.

My research field, reinforcement learning, is about creating algorithms that learn to succeed. But the definition of success is always provided from the outside. I’ve talked to cognitive psychologists and asked them what OUR definition of success is. After all, if we know what drives people, maybe we can build machines in that same design. But they didn’t know. And the more I’ve thought about it, the more I feel like there is NO in-born definition of success in human beings. The moral and ethical history of our species is one of asking the question of what it means to be good, to be worthy. And, over time, we’ve decided to become more inclusive, more humane, more supportive of one another.

I don’t think that’s us slowly discovering the truth. I think that’s us changing our mind about what’s useful, what matters to us.
And here’s the zinger. Who decided that acceptance should trump violence? That oppressing people for being different is bad.

No one. Well, not no one. No one person. These ideas came out of discussions amongst groups of people. People sharing ideas, debating, disagreeing, figuring things out together.

Because we’re all limited, fallible, and our choices impact others, we can’t leave big decisions like what we collectively find “useful” up to any one person. We need ways of sharing ideas and hashing it out together. That’s what Democracy is.

Without these conversations, we can’t work together. We can’t fulfill the radical Boxist philosophy and decide what’s useful. We can’t be human.
When George Orwell wrote 1984 to warn us of the dangers of totalitarianism, I think that’s what he had in mind. As right as you think you are, shutting down debate diminishes all of us. As graduates, you need to enter into this debate. Assert. Listen, Discuss. Reconsider.

But I hope you leave here excited, empowered, and ready to engage the wider world. We may have computers and power tools, but we need your energy and insights to figure out what they are useful for. 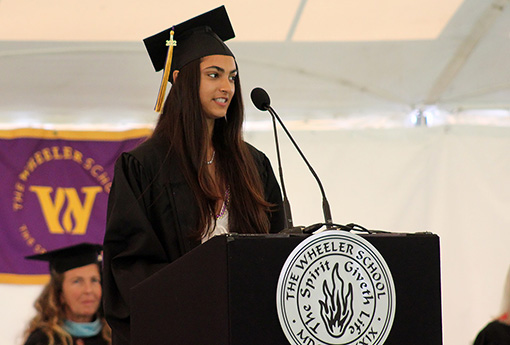