Members of the Upper School’s Peer Support program recently shared a collection of End-of-Quarter Tips and Info with their fellow students. The slideshow, which they developed in partnership with faculty and staff from a range of Wheeler offices and departments, included guidance and resources on topics like effective communication, healthy habits, and academic support.

The tips and info was one of many initiatives conducted by Peer Support, which is made up of Wheeler 11th- and 12th-graders who serve as mentors to younger students. “The Peer Supporters work hard to support the Upper School student community with specific programming on academics and student life,” explains the program’s Co-Advisors, Teachers Tiye Cort Odima and Felipe Ferreras ’13. “Traditionally, Peer Supporters also work closely with 9th-grade advisories.

The Peer Supporters have a range of reasons for joining the program, but they often return to a sense of giving back.

“When I was a freshman, I remember the impact my Peer Supporters made on my transition to the Upper School, and I wanted to reciprocate what happened to me for current underclassmen,” says Peer Supporter Chloe L. ’24. “Freshman year was so stressful–the first few months were full of uncertainty, and I just wanted to be another person who freshmen could turn to that was not a teacher or advisor.”

Chloe’s sentiments are echoed by many other students, like Vikram S ‘23, who became a Peer Supporter “because of the great job done by the Peer Supporters I had. I try to emulate how they treated me and my advisory everyday, from the way I greet people to all of the other things I do at school.”

“As a freshman who was new to Wheeler, I felt a lot of uncertainty about whether or not I could fit in and get used to being a student here,” adds Mariana M. ‘23. “When I decided I wanted to apply to be a Peer Supporter, my aim was to make sure any 9th-graders who felt the way I did felt supported.”

Anand H. ‘23 became a Peer Supporter “to help freshman fit seamlessly into high school, just like my peer supporters helped me,” while Beyanca G. ‘23 says, “Being a Peer Supporter allows me to directly connect with freshmen and students around the school I otherwise wouldn’t have been able to meet and bond with. Peer Support is important because freshmen feel safe and heard as they are navigating their first time being in high school.”

Eliot W. ’23 wanted to help other students become acclimated and comfortable in the Wheeler community, while Daniel R. ‘24 wanted to be part of the Peer Support system that provides underclassmen with a system to connect with older students.

“I really enjoyed having a Peer Supporter when I was freshman,” reflects Leenah G. ’23. “Especially since I was new to the Wheeler community as a whole, it felt nice to know that there were upperclassmen looking out for me and making sure I adjusted well. They were very nice and helpful, and I wanted to be a part of that group when I got the chance. It allows me to reach out and better myself as a leader and person by helping out others.”

Ella K. ‘23 remembers the Peer Supporters “from when I was a freshman really fondly–they made morning advisory fun for us, and I wanted to be able to do the same for the current freshmen. My favorite part of being a Peer Supporter is getting to run workshops on a topic of our choice during Unity & Diversity Week, because it gives us a chance to hone in on a specific social-justice related topic we’re passionate about.”

Emma B. ‘24 “wanted to build the connections across grades that made the Upper School feel so unified when I was an underclassman,” and Eva J. ‘24 says that, “Beginning Upper School is a hard transition, and as a Peer Supporter, I hope to make that transition easier for the 9th-graders.”

“I am a Peer Supporter because my Peer Supporter during my freshman year was really impactful, friendly, and present for me, and I wanted to be that person to someone else,” adds Franklin P. ‘24.

“I had, to put it lightly, a challenging transition to high school,” says Joshua H. ’23. “As a Peer Supporter, I have the opportunity to serve as a resource for the incoming freshmen and to impart upon them the wisdom that I’ve gained throughout the years.”

Marc J. ‘24 became a peer supporter because, “I wanted to support the class of 2026 and make their switch into High School from Middle School as smooth as possible. I remember how awesome my Peer Supporters were my freshman year, and I wanted to give back to the new freshmen.”

Megan G.-P. ‘23 loves connecting with the 9th-graders and helping them adjust to Upper School, while Mia L. ‘24 wants the incoming and current freshmen to feel like they can reach out at any time and have support throughout their Wheeler journey.

“I’m a Peer Supporter because the well-being of the freshmen is important to me,” says Nick K. ’23. “I know starting school in a totally new environment is tough, so I want to help ease the transition.”

Rene C. ‘23 wanted to be a peer supporter because, “I remember how helpful my peer supporters were for me, and I love making connections with the underclassmen,” and Sadie M. ‘24 says she “looked up to my Peer Supporters” during 9th grade. “I think Peer Support is important so the freshmen know they’re not alone, in some cases, at a new school.”

Samantha F. ‘23 is a Peer Supporter because, “it is a way for me to get to know the rest of the Upper School and make sure that everyone feels welcome and supported, especially when adjusting to Upper School,” and Sophie I. ‘24 remembers what is was like to have the support of an upperclassman and found their support very helpful. “I think that it’s important to be a Peer Supporter to help the Wheeler community and provide advice to the lowerclassmen,” Sophie says.

“Being a Peer Supporter is important as it gives students new to the Upper School a recourse for help and advice,” adds Vijay S. ’24. “It influences me to be a better role model.”

William S. ‘24 is a Peer Supporter because he wants “to be there for the freshmen just like when I was a freshman there were Peer Supporters there for me,” and Wyatt G. ‘23 is also appreciative of everything his Peer Supporter provided. “I joined the Peer Support program because I could not imagine my 9th-grade experience without my Peer Supporter who consistently helped me in all aspects of my Wheeler life,” Wyatt says. “Peer Support endows the 9th-grade class with wisdom and a friendly face, and it eases the transition from Middle School to High School.” 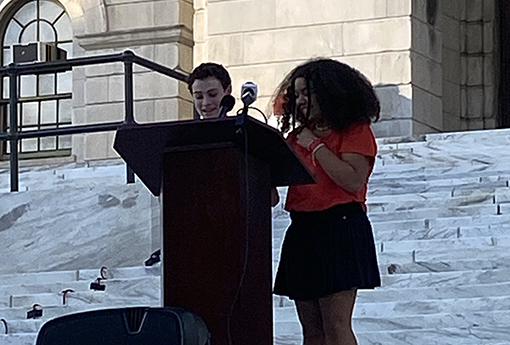